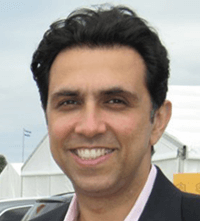 Faisal Irfan Mian is a principal at Liquidity Finance LLP, an Emerging Markets fixed income boutique with offices in London and New York and clients in over 30 countries. Before co-founding Liquidity in 2008, he worked at Lehman Brothers and Morgan Stanley for nearly 12 years. His expertise throughout, has been investing in Emerging Market nations. Faisal also had a short stint working at the United Nations secretariat and holds a Masters in International Affairs and a MBA from Columbia University in New York. He attended Hampshire College in Massachusetts where he earned his Bachelor in Economics. In addition to being on the Pakistan board of Care Pakistan, he also works with Empower, which supports local organizations in EM countries and has been a partner at Acumen Fund, a non-profit venture fund that uses entrepreneurial approaches to solve the problems of poverty.

Your ticket for the: Faisal Mian