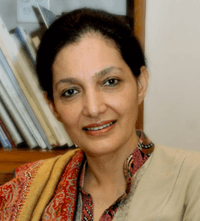 Seema Aziz founded CARE Pakistan, the largest educational NGO in Pakistan, in 1988 to educate children who would not otherwise have been able to go to school. Aziz began her retail career in 1985 when she co-founded Bareeze, one of Pakistan’s leading high-end fashion retailers, with her brother Hamid Zaman. Bareeze quickly became the first Pakistani textile producer to export high-quality fabrics to international markets, including India, the UAE, UK and Malaysia. Born in Lahore, Aziz studied at the University of Punjab, where she received her Bachelor of Sciences, followed by an LLB (Bachelor of Laws) from the same institute. Aziz then went on to complete an Executive Education Programme at Harvard Business School. Married with three children, since 2011 she has served as Chairperson of TUSDEC (Technology Upgradation and Skill Development Company) and is on the governing body of TEVTA (Technical Education and Vocational Training Authority), as well as sitting on the Boards for the Pakistan Fashion Design Council; Punjab Board of Investment and Trade, Mobilink Foundation and the Punjab Education Foundation. Seema Aziz has been featured in several international publications, including Philip Aureswald’s book The Coming Prosperity, the MIT journal Innovations, Forbes and the Telegraph as well as Pakistan-focused publications such as The Herald, Blue Chip, Libas and The News. Aziz was recently named Philanthropist of the Year by Hello! Pakistan and has written on the subject of children’s education in the likes of Eastern Eye.

Your ticket for the: Seema Aziz