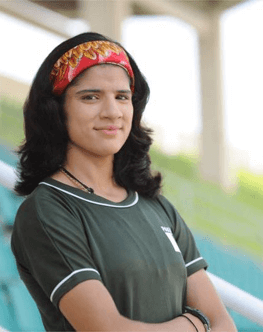 Rabia Ashiq has made history, not only as a CARE student but as a Pakistani female athlete too by participating in the Summer Olympics 2012 in London.

Hailing from a modest background, Rabia attended a CARE-adopted school in the village of CharrarPind in Lahore. As a student at school, she always excelled at sports and especially in running. With the support of her teacher Ms. Ghazala she competed in several inter-city and inter-school events. Although she initially received a lot of criticism and discouragement from family and friends, she continued a rigorous training program throughout school, whilst completing her matriculation exams. During one of her inter-board games, she was approached and selected by coaches from WAPDA. Ever since, she has competed not only nationally but in international sports festivals as well. Travelling all over the world, she has competed in the Grad Prix in Japan and the Asian Games in China, where she has won several medals. She has broken the national record for 500 metres at the National Athletics Championships in Islamabad in May 2012. In 2012 the Olympics committee selected her as a wild card entry and she believes the experience of representing Pakistan at the Olympics, as female athlete was an honour. In total, she has won 52 gold medals for WAPDA and set two national records, and does not plan to stop anytime soon.
Rabia believes that girls should educate themselves and realise their dreams through hard work and persistence. She insists on pushing for sports programs in all schools and wants the government to form a sports policy on a national level. Ultimately, she would like to give back to her village, school and country so other young girls have the same chance to pursue their dreams, whatever they maybe. Rabia is a testament to what hard work and perseverance can achieve.

Your ticket for the: Rabia Ashiq